Something for the weekend - The Bronze Horseman

I read The Bronze Horseman by Paullina Simons a couple of weeks ago because it was given to me by a friend for Christmas because it is his favourite book. As soon as I started it, I regretted leaving it so long before I gave it a go. I was  little put off by the size - it's 650 pages - but it's so gripping, that you don't feel like you're reading a massive tome! 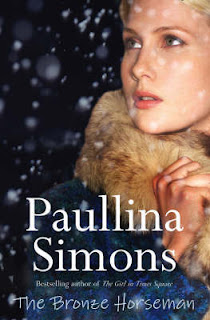 The book starts on the day the Second World War breaks out in the USSR, which is also the day when 17-year-old Tatiana meets 22-year-old Red Soldier ﻿Alexander. She has been sent out to buy food but buys herself an ice cream instead and attracts Alexander's attention because in all the chaos of the day, she is calmly sitting on a bench eating ice cream. This is the beginning of a turbulent and epic romance. Things do not come easily for this couple, with a love triangle, a secret that could get them both killed and the Siege of Leningrad to contend with. I didn't really know anything about the Siege of Leningrad before I read this book, but Simons really gives you an idea of what it was like that first Winter with no food and no way out of the city. It is estimated that between 700 and 1000 Leningrad citizens died every day in January and February 1942 and Simons does not shy away from this fact, with hardship and death becoming common place for the characters.

I don't want to give away too much of the plot, because as well as being a romance, this book is a thriller about how to survive in the extreme world of Stalin's Russia, which was even worse during wartime. For example, any Russian soldier who was taken prisoner during World War 2, when finally returned home, would be sentenced to at least 10 years in a GULAG for betraying their country by being taken prisoner - the idea was to die before that happened. There is quite a lot of description of the Soviet role in World War 2, because of Alexander being a front-line soldier, and I found that really interesting, because again, I didn't really know much about it.

The great thing about this gripping, fascinating novel, is that it's the first in the trilogy - so if you get to the end and like me, have to know what happens to Tatiana and Alexander next, you can read books 2 and 3 (Tatiana and Alexander and The Summer Garden). Also, don't be put off by the covers - they're not just romances, there's so much more to them!

Amelia
Posted by BlackwellsCXR at 17:26