Something for the Weekend.. Ibn Fadlan & the lands of Darkness 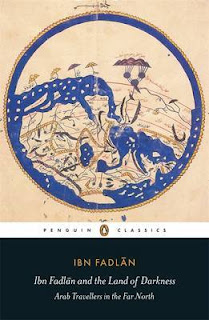 Written records of historical encounters invariably run north to south or west to east: we discover 'them'; they remain 'the other'; so Penguin Classic's new collection 'Ibn Fadlan and the Land of Darkness: Arab Travellers in the Far North' Ibn Fadlan & the lands of Darkness is a welcome corrective to the westocentric tomes of exploration we're used to. Actually the sub-title is a little misleading as most of the journeys described take the 9th and 10th century Arab scribes to what we now call Central Asia, the lands of the stans: Turkmenistan, Kazakhstan, Uzbekistan and Bashkortostan: lands we imagine to be hot and dry but which to the Arab voyagers from Baghdad were the farthest extremities, terrifying lands full of fabulous beasts and races of heathen giants called Gog and Magog, who occasionally break through a wall raised by Alexander the Great to raid the lands to the south.

It is on one of these voyages that Ibn Fadlan, perhaps the most famous of these travellers, encounters Vikings: the Rus, Swedish Vikings who head east to trade with the Byzantine empire and Muslim realms using the Volga River to navigate. This encounter forms the centrepiece of the first part of the book offering us the only eyewitness encounter of that old cinematic standby, the Viking ship burial, an account far more bloodthirsty than Hollywood has ever let on. While leaving us in no doubt who is civilised and who are 'the filthiest of God's creatures', Ibn Fadlan finds much to admire in the violent and physically striking Scandinavians.
Other titles of a similar vein here in Charing Cross Road's history department feature the more renowned Ibn Battuta, a later 14th century traveller:  the adventures of Ibn Battuta and The Odyssey of Ibn Battuta

Neil
Posted by BlackwellsCXR at 17:29 No comments:

Something for the weekend - Small Island

I had owned a copy of Small Island for quite a while before I got round to reading it and I wish I'd read it sooner.

The book is about Jamiacan immigrants to Britain after World War II, being mainly set in 1948. As the 'mother country', England holds great promise for Gilbert and Hortense. Gilbert had fought for England in the RAF during the war and had a much better experience than the black members of the US army and he expects to have the same warm welcome when he returns to make a life with his new wife, Hortense. She imagines that having gained her teaching qualification in Jamaica, she will find it easy to get well-paid employment, but it is not easy and the two of them have to live in one room in a boarding house run by Queenie.

Queenie Bligh is married to Bernard, who went to war and never came back so she rents out the spare rooms in her large house to immigrants, much to the chargrin of her neighbours. She is one of the most open-minded characters in the book and Levy gradually fills in details of her past, especially her touching relationship with her father-in-law, Arthur.

I felt like all of the characters in the novel were beautifully drawn. Through them Levy explores a time of flux in Britain's history which few people are probably aware of. She explores the themes of empire, prejudice, war and love and it is a truly moving book which I think everyone should read. You get just enough of each character's story at each stage to make you keep turning the pages to find out what happens to them all. They are a group of people trying their best to get by in difficult circumstances, which I found really touching.

I agree with the Guardian, that this is a defining book of its decade.

Posted by BlackwellsCXR at 17:00 No comments:

Something for the Weekend.. Le Freak

This weeks Something for the Weekend is 'Le Freak' by Niles Rogers.

Legendary producer and co-founder of Chic, Nile Rodgers wrote 'We Are Family' for Sister Sledge and 'I'm Coming Out' for Diana Ross before producing Let's Dance for David Bowie and Like a Virgin for Madonna. But before he reinvented pop music, Nile Rodgers invented himself. Le Freak is the personal, moving story of a creative genius. It is also a stunning recreation of an age - told by the man who wrote its soundtrack. 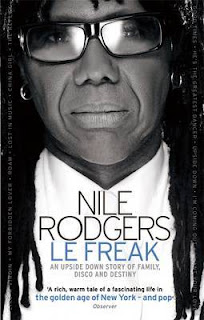 ''This has to be one of the best autobiographies I've read this year. From his upbringing,with his drug fuelled relatives,and how he managed to strive & work hard to get himself out of it - to becoming one of the most sort after producers/musicians of our time. Once you read a few pages,you will not be able to put it down''.

Buy it here or find it on our Staff choice display in store.
Posted by BlackwellsCXR at 17:18 No comments:

Something For The Weekend: The Smoking Diaries

Something For The Weekend: The Smoking Diaries by Simon Gray

As the Olympics draw to a close this weekend it seems fitting to recommend something thoroughly un-Olympian. Not that the Olympics haven't been great, you'll get no complaints here, it's just that you can have too much of a good thing and I'm beginning to feel a little sported-out. So, The Smoking Diaries by Simon Gray. 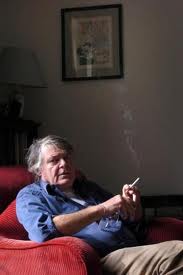 Olympian is not a word you would immediately associate with Gray (though he was a cricket lover all his life and talented athlete in his youth) and it would be fair to say that The Smoking Diaries is a sedantary book. For the most part Gray is sitting at his desk late into the night thinking about his life. Sometimes he is on holiday sitting at a table overlooking the sea late into the night thinking about his life. At all times he is smoking or about to light another cigarette.

It is not, however, the smoking that makes this book anti-Olympian. For the record neither I, nor Blackwell's recommend smoking. Simon Gray doesn't recommend smoking. The book isn't about smoking, it just happens to be what Simon Gray is doing while he writes his diary each night. What makes the book anti-Olympian is that it's about the whole of a life not just a crowning moment, and it's success is no less spectacular than Usain Bolt's.

Gray looks clearly and unsentimentally at the things he has done. There are the long years of alcoholism, the affairs, the hurt he has brought upon others and himself. Then there are the good things: the plays, the successful second marriage, the friendships. How all of it fits together now that he is on his way out is what concerns him. The ways in which his increasing, and increasingly terrifying sense of mortality colours everything that has happened in his life obsesses Gray. He sits up late into the night thinking about it all, trying to puzzle it out, distracting himself with memories of family, lost friends, personal and professional successes and catastrophes.

It calls itself a diary, but while we never doubt that Gray keeps a diary, we know we are not reading it. There is a rough chronology of events taking place in his life on which the book depends for momentum, but the glory of it comes in the places he drifts off to from these events. What we are reading are the things that go through Gray's mind while he is writing his diary. They are the things that he couldn't put in a normal diary because the diary would end up as a book: The Smoking Diaries.

In tone and pace it reads like a mind talking to itself about death. It is admittedly an unusually wise, hyper-articulate, funny and honest mind, but it is recognisably human, unlike, say, running 10 metres in less than a second, then doing it again another 19 times in a row.

Posted by BlackwellsCXR at 20:28 No comments:

Something for the Weekend.. The Art of Jaime Hernandez.

The Art of Jaime Hernandez. 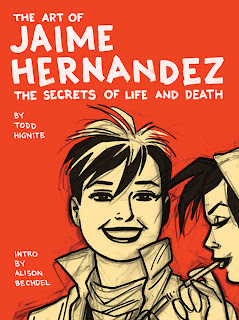 First published in 1981 "Love and Rockets" is one of the most influential comics ever published, redefining what it is possible for graphic fiction to achieve. Jaime Hernandez's Locas stories have been the backbone of the comic since its inception. Starting as the story of a group of teenagers in the early years of the California punk scene, over the past 30 years the characters have aged in real time leading to a depth of character unheard of most fiction.

For the first time in "The Art of Jaime Hernandez" the author has opened his archive, revealing never before seen sketch's and artwork. Accompanying the art are in depth interviews with Hernandez, where he discusses the inspiration behind the characters who have populated "Love and Rockets" for the past 30 years.

A fascinating insight into the work of one of the greats of modern literature. Alan Moore has said "Jaime's art balances big white and black spaces to create a world of nuance in between, just as his writing balances our big human feelings and our small human trivias to generate its incredible emotional power. Quite simply, this is one of the twentieth century's most significant comic creators at the peak of his form, with every line a wedding of classicism and cool." and as Pop Will Eat Itself told us many years ago Alan Moore knows the score. 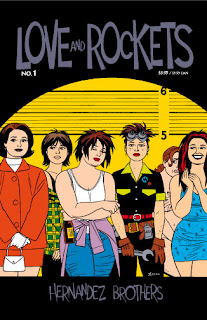 Posted by BlackwellsCXR at 15:07 No comments: