Something for the weekend - 'Five books that..' No1

'Five Books that changed your life'

This weeks 'something for the weekend' is a little different. Soon on the shelves of our beloved book shop you'll see a new promotion: 'Five books that changed your life' or 'our lives', I'm not sure the details have been hammered out yet. So I thought I'd go first & run you thorough my chosen five, what they are, why they're great & what affect they've had on me. Let me take you back in time..

Number one, these are in vaguely chronological order not in order of merit (come on picking five was hard enough!), is The secret diary of Adrian Mole aged 13 & 3/4 by Sue Townsend, I was roughly the same age as Mr Mole when this came out & I liked that fact & I liked the cover so I bought it. I'd been a fairly avid reader from a young age, I was obsessed with Dr Who so had read a lot of the adaptations, & various other school favourites (Famous five, Asterix, Jennings etc) but nothing had even been as relevant to me as this. I realised that books could speak to me about my life. So for better or worse (& judging by my own diary of the time - for worse) I sort of became Adrian Mole, bad poetry & first crushes included. It's actually a very funny & acutely observed look at early adolescent, unfortunately I saw it as a guide book. But I forgive it! & I still love it to this day.
Number two is The Hitchhiker's guide to the galaxy I wasn't much older (possibly even younger) when I first read Douglas Adam's masterpiece & it's the book I re-read the most. The first of a 'trilogy in five parts'  to me it's just about perfect (the other four are also very good especially two & three). The adventures of Arthur Dent in space & time shaped not only a nascent love of Sci-fi but also,I believe, my whole sense of humour. The book is thick with Adam's very own, peculiar,dry, but most importantly hilarious wit & I adored it. If ever I need a hug from a book I return to Arthur, Ford & Zaphod et al. This is the kind of book that sparks the imagination & keeps you entertained  - absolutely perfect for young readers.

Number three is a different kettle of fish Requiem for a dream by Hubert Selby Jr. A few years later (A level time) in the long summers that used to exist I would walk up  & down the shelves of my local Library (keep the libraries open!) & choose interesting looking titles, this was how I discovered many excellent writers: Vonnegut, Irving, Kundera, Mishima to name just a few. I could have chosen one of  a number from this time. But the reason I chose 'Requiem' is that it's stayed with me, without looking at it I can feel it's choking, desperate atmosphere. I remember being genuinely shocked as the plot darkened & at the bleak & unusual but pulsating prose style. It was this type of novel that opened my eyes to that fact that there were no limits in literature & that books could take you anywhere you wanted to go.

Number four is  Batman The killing joke. I'm not actually a huge graphic novels fan but this is unbelievably good. The art by Brian Bolland, who I knew from 2000ad & the story & script by Alan Moore, who I was unaware of the time (though he had written for 2000ad I only noticed artists for some reason) are of the utmost quality. I would, & still do, take an age over each page devouring the stunning visuals & enthralled by Moore's plotting. There is a very cinematic feel to it, more than most graphic novels I've read. For example the way they segue past into present never fails to delight. The Joker here is as abhorrent as you will see him & yet you will feel some sympathy as Moore reveals his desperate origin story. Even if you're not a big Graphic novels fan you should have a look at this.

& Finally at number five it's The Damned Utd  by David Peace. I've already done a review of this which you can find elsewhere in the blog. Suffice to say it's my favourite book & David Peace is the best writer of his generation. Friends & colleagues - if you've ever had a drink with me & I've ended up going on & on about this book I apologise, but if you've then picked it up & read it, I'm not.. & nor are you.

It's difficult to pick five books that changed or shaped you, as in it's difficult to hone it back to five. What would you pick? Over the next few weeks our bookseller will be telling you there favourites & why they mean so much to them. Because as I said in the very first post, we love books & we want to tell you why.

Gary
Posted by BlackwellsCXR at 16:43 No comments:

Something for the Weekend - The Weight of a Human Heart 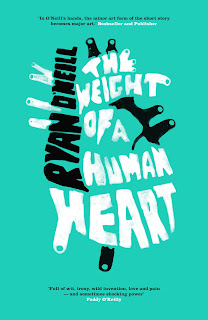 Though I own many, many, many books, it has never before occurred to me that among my own personal library I only possess one collection of short stories. I bought Raymond Carver's What We Talk About When We Talk About Love when I was still in Sixth Form and I found most of his stories inaccessible and alarming. Though I have since come to see the error of my youthful ways, I haven't felt the need to buy any more short stories in the same way that I felt the need to buy everything Ali Smith has ever published. This may be why when I picked up Ryan O'Neill's The Weight of a Human Heart, I was surprised by just how much I enjoyed it.

At his best, O'Neill presents wonderfully colourful and interesting stories that, though short, leave you feeling entirely satisfied with their strong wit, structure and completeness. The first story, that gives the collection its name, was my favourite due to its focus on what was internally important to people's lives. The ins and outs and economics of their lives are left at the wayside as habits, memories and relationships take presidency in the tales told with an exceptionally interesting style. There is a literary theme to almost every story, each either being about story telling or language in its own way, and this links them wonderfully together, whilst simultaneously showing how important books are in all their forms to different people. I concede I may be a little biased in my enjoyment of that element.

O'Neill is most successful when he is portraying parents and children, since his lovers can be so cruel it makes you wince. The difficulty of dealing with your parents as you become an adult is beautifully portrayed and several stories had me in tears more than once. The only fault I could find was that sometimes O'Neill is a little too clever for his own good, and in attempting to make a linguistic point about form strays a little too far away from good storytelling. However, these episodes are interesting in themselves and, due to the nature of the book, mercifully short. On the whole, each story leaves you with something to think about, and the vast variety of characters and tone within this collection makes it consistantly interesting to read.

Even if, like me, you wouldn't normally choose short stories, I would say that O'Neill presents a very strong argument for making a change.

Robyn
Posted by BlackwellsCXR at 16:31 No comments:

Something For The Weekend - Cloud Atlas 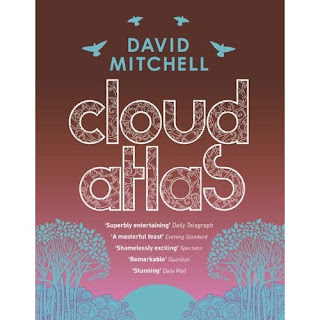 I started reading Cloud Atlas by David Mitchell for terribly obvious reasons. My entire family had read it years before, but it took the release of a trailer for the new film to make me finally pick the book up myself. I would be careful about watching the trailer before you have a go at the book itself since the characters in it are so wonderfully diverse and interesting that it is better to be able to enjoy them without flashes of Tom Hanks and Halle Berry's faces obscuring your imaginative vision. No one wants flashbacks of Cat Woman at the best of times, let alone when you're trying to unravel a challenging novel such as Cloud Atlas.

If you have already seen the trailer, then do not despair, as Mitchell is a wonderful craftsman and the characters become so real throughout the narrative that it's easy to forget the film, the actors, indeed even the fact that you have a cup of tea quickly going cold next to you. I am in awe of Mitchell in the same way I am in awe of Joseph Heller, because their books are written in such a manner that it is almost impossible to see where they could have started. I have no idea how Cloud Atlas was written, just as the seams and stitches that hold Catch-22 together are completely invisible to me. It is impressive to read. The strength of the novel lies in its characters who, though not all instantly likeable, are able to draw the reader successfully into their consciousness and into their world view. As one example, when you are first introduced to the character of Timothy Cavendish most readers will find him unpleasant at best. However, after his incarceration in a ghastly nursing home, he managed to change my mind and I could not help but urge him forward in his struggle. I rooted for him despite his alarming misogyny and pig-headedness, and ultimately loved him in spite of himself. Characters such as this make a challenging structure like the one Mitchell uses worth overcoming.

The structure is essentially of six narratives that are set hundreds of years apart on different continents with numerous characters that have tenuous literary-based links. It sounds confusing, but the beauty of it is that it really isn't. Mitchell guides you through the first half of every story, breaking off at a tantalising junction in each and launching you head first into a completely new environment and a brand new set of characters. Then, as you continue, you discover the conclusions of each story one after the other only to find that the stories were in fact about the same things all along. I will leave you to discover exactly what those are.

Robyn
Posted by BlackwellsCXR at 13:06 No comments: