Something For The Weekend: Tales of the Ketty Jay

There are few books that defy categorisation quite like Chris Wooding's novels about Captain Darian Frey and his crew. Not classic Science Fiction (no space ships, no colonists, no zap guns), not Fantasy (no wizards, no elves) and not Steampunk (no Zeppelins here, the aircraft are instead powered by aerium gas) -- so what are these strange stories?

Fun. In a word. Wooding's books are fast-paced, teeth-rattling affairs full of sky pirates, dysfunctional rogues and down-at-heel nobles. With breath-taking dog-fights, brutal brawls and desperate shoot-outs there's plenty to keep a reader on the edge of his or her seat. That the Ketty Jay novels have plenty of easy charm doesn't hurt either.
Retribution Falls (2009) introduces the reader to the foolhardy, womanising and down-on-his luck Frey. The crew of the Ketty Jay are hardly a tight-knit bunch though. From the boozy Malvery to the mysterious Navvie, Jez, the ship really does serve as a portable rogues gallery. And their luck takes a turn for the worst when they are framed for destroying a ship during a heist gone wrong. Captain Frey has to draw on every resource to prove his innocence.

The Black Lung Captain (2010) presents the crew with a dangerous mission far away on a remote island, working with Captain Grist. Forced to take the job out of desperation, Captain Frey quickly regrets accepting the assignment and realises there's much more at stake than a a lost artifact, including the lives of his crew, who he has grown rather fond of. The Black Lung Captain twists and turns and the chapters end on the sort of cliffhangers that will keep you up long after bedtime.

This year Wooding gives us The Iron Jackal (2011). Captain Frey has plenty of reasons to feel good about himself: his ship has been patched up extensively, his crew have laid to rest their demons (mostly) and he's even a little famous. And for the right reasons. So why is he so far from home in Samarla, the land of their ancient enemies? And why has he taken a job from the dread-pirate Queen, Trinica Dracken (his ex fiancee)?
Each book can be read alone, but it really is worth taking the time to read them in order and see the crew bond together as Captain Frey denies his more self-destructive urges.

The Iron Jackal is out now.
The Black Lung Captain is part of Blackwell's 3 for 2 promotion.
Posted by BlackwellsCXR at 16:35 No comments:

Something for the weekend...

Me Talk Pretty One Day by David Sedaris
Are the increasingly cold and dark evenings making you feel like Winter is looming with nothing to brighten up the season except Christmas, still more than two months away? Settle in on the sofa this weekend with a book that will cheer the blackest of hearts.

An American humourist who revels in human frailty without ever being cruel, this is a great introduction to David Sedaris. In this collection he explores the difficulties of communicating successfully with other people. These include his high school speech therapist (brought in to train him and other 'future homosexuals of America' out of their lisps), his large and hilarious family, a writing class in Chicago and the French class he attends in Paris.
I laugh out loud every time I re-read this book, which can have its drawbacks on the tube. But for a light read that will fill you with glee, immerse yourself in Sedaris' world and revel in his joy when he finally understands enough French to decipher his teacher as she tells him, 'Every day spent with you is like having a cesarean section'. She is utterly wrong.
Sarah T
Buy it here
Posted by BlackwellsCXR at 15:36 No comments:

Peter's Booker round up!

Julian Barnes - The Sense of an Ending

A short novel, almost a novella, but beautifully written. A meditation on memory and history. If all history is subjective then how much more so are our personal histories, what we choose to remember as fact and what facts we choose to remember.
Carol Birch - Jamrach's Menagerie
Starting in Victorian London then launching out into ever darker turns, the plot is impossible to second guess. The writing has been compared to Dickens and Melville but I would add Joseph Conrad to the list.

Patrick deWitt - The Sisters Brothers
The first 'western' to be shortlisted for the Booker Prize is also a bleakly comic novel. Imagine Cormac McCarthy meets 'Bottom'. A bizarre cast of eccentric outcasts thrown into deconstructed western cliches. The most likely of the short list to be filmed.
Esi Edugyan - Half Blood Blues
Set in Paris and Berlin just before and during WWII, it tells the story of jazz musicians, German and American, black, white and mixed race, caught in up the mayhem. A novel full of historical detail and atmosphere but a bit predictable in plot, when they tell you on the cover that it's a story of betrayal you pretty much know where you're going.
Stephen Kelman - Pigeon English
This story of life in a high rise housing estate in London, full of organised crime, gangs and violence, could have been another soul crushing excursion into social commentary, what saves it is it's narrator. Harrison is an eleven year old school boy recently arrived from Ghana with his mother and sister, his fascination and enthusiasm for everything around him make it a joy to read. Asweh, funniest book ever!

A. D. Miller - Snowdrops
Early 21st Century Moscow, corruption, depravity, crime. 'Capitalism with the gloves off'. The author has obviously lived in Moscow and the novel is full of depressing atmosphere and lurid detail but the story of a naive English abroad being done over by wily Russians has been attempted before, as in James Hawes' "Rancid Aluminium".


This year the short list has been much criticised for being 'light weight' but at least it is more eclectic than usual taking in adventure, thrillers, comedy and even a western. If the thrillers run a little to type, the adventures are big, the settings brilliantly evoked and the comedy funny. Julian Barnes is the most likely winner, as this is the fourth time he has made the shortlist and his prose is perfectly honed but only over 150 pages (Ian McEwan's "On Chesil Beach" was criticised for making the shortlist at a similar length). The novel that I'd love to see win is Stephen Kelman's "Pigeon English", a first novel whose narrator allows you to see the world through innocent, wonderous eyes.


Peter Marsh
Posted by BlackwellsCXR at 14:32 No comments:

Something for the weekend

How To Be A Woman by Caitlin Moran 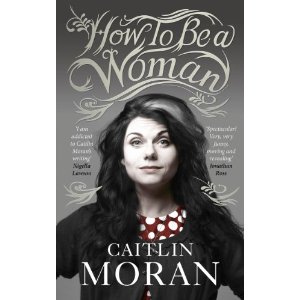 If you're a fan of Caitlin Moran's writing (or more precisely, her wit) then How To Be A Woman is a winner.
Having read and studied many different books on feminism, I was excited to hear that Moran had decided to tackle the subject. A diptych of a book, Moran has infused snippets of her own life alongside her efforts to adopt feminism into said life story. As a fan of Moran’s writing and critiques, I hoped she would bring her usual panache and wit to How To Be A Woman – and she didn’t let me down. There are brilliant stories concerning Jordan, Lady Gaga, a Berlin sex club, bra fittings at Rigby and Peller, rising through the ranks at Melody Maker and a much needed discussion on why pants are getting smaller.
How To Be A Woman gives laugh out loud moments (as I did whilst reading it on the tube) and some more sobering thoughts on growing up, sibling rivalry, bullying, falling in love and a slightly comical, if excruciating, account of childbirth. Through it all, Moran's philosophy remains that she is a feminist without having to be the next Germaine Greer and if she can do it, so can every other woman.
Essentially, How To Be A Woman is a great introductory text to feminism and leaves the reader open-minded to their own ideas about what being a woman is for them. My favourite section, perhaps controversial, was the chapter about abortion, where Moran details not only her own experience of abortion, but also the stigma that is still attached to it. I think in the present age, it is high time a woman stepped forward and declared that ‘actually on this occasion, this is the right decision for me’. In no way is this advocating constant use of abortion, but it is refreshing to read a perspective such as Moran’s. Well worth the read.
Buy it here
Michelle
Posted by BlackwellsCXR at 10:52 No comments:

Email ThisBlogThis!Share to TwitterShare to FacebookShare to Pinterest
Labels: Caitlin Moran, feminism, How To Be A Woman, Something for the Weekend
Newer Posts Older Posts Home
Subscribe to: Posts (Atom)