Last weekend saw the second Charing Cross Road Fest and it was a roaring success! Foyles and Blackwell's took the lead again, but there were more shops involved this year and more of them held their own events, including a zine launch at Quinto and Francis Edwards, an event on Britishness at Charing Cross Road Library and an art book launch at Koenig Books. 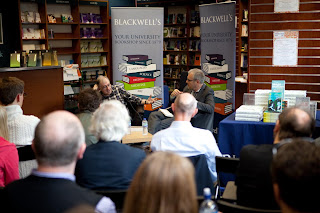 In Blackwell's we kicked the weekend off with Gollancz authors Christopher Priest and Simon Ings. Ings,The Adjacent and about his previous books, including probably his most famous - The Prestige, which he thought was an un-filmable book! The Adjacent is about Tibor Tarent, a freelance photographer, who is recalled to Britain from Anatolia where his wife Melanie has been killed by insurgent militia. IRGB is a nation living in the aftermath of a bizarre and terrifying terrorist atrocity - hundreds of thousands were wiped out when a vast triangle of west London was instantly annihilated. The authorities think the terrorist attack and the death of Tarent's wife are somehow connected. A century earlier, a stage magician is sent to the Western Front on a secret mission to render British reconnaissance aircraft invisible to the enemy. It is a truly brilliant novel and Priest opened the festival with a big crowd and a long signing queue.
author and editor of Arc magazine, interviewed Priest about his new book,

Later in the afternoon we had a ukulele workshop with ukulele magician Ian Lawrence, who had a very attentive audience learning some simple tunes and chords. We had a free ukulele to give away, thanks to our friends at John Wiley and it was lovely to see an excited 5-year-old girl present with her very own ukulele! Then we had Martin Bannister, who talked about writing and read from his debut novel A Map of Nowhere in his very first bookshop event.  A Map of Nowhere is a touching novel about mental illness, family and the secrets we all keep event from those closest to us. Miranda sawyer said it is ‘a touching, memorable book that makes us look at human secrets and realise that they reveal as much as they hide. Oh, and it’s funny too.’ 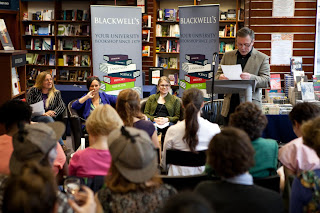 The final shop event for us on the Saturday was our Best Fictional Detective Balloon Debate, featuring Barry Forshaw, Emelyne Godfrey, Sara Sheridan and Nicola Upson. Barry's choice of Sherlock Holmes came top in our pre-debate vote and I think we all thought he was sure to win, but in a shock twist in the half-time vote where 2 people were kicked out of the balloon, Holmes was out. As was Emelyne's choice of Judith Lee, a heroine written by Richard Marsh who was hugely popular in his day, but has been slightly forgotten now. She was described as 'the female Sherlock Holmes' and could read lips as well as being an expert in ju jitsu. So the second half of the debate saw Precious Ramotswe (fought for by Sara) and Alan Grant (fought for by Nicola), battle it out to be crowned 'the best fictional detective'. In the end it was Grant and Nicola who were victorious and we hope that a lot of the people on the audience have now picked up a Josephine Tey crime novel to read about Alan Grant's exploits. 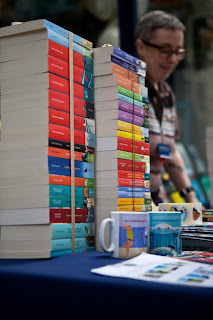 After the epic literary pub quiz on the Saturday evening, Sunday was kicked off with a crafternoon, where people to drop in to paint, or do origami or sew. It was lovely to have a relaxing few hours of being creative and we hope we can repeat this event again in the future. Sunday afternoon saw our drama talk (well, we are in the West End), featuring On Man, Two Guvnors playwright Richard Bean talk to legendary theatre critic Benedict Nightingale about all things theatre and what inspires him as a playwright. After the successes of Toast, England People Very Nice, The Heretic and the incomparable One Man, Two Guvnors, Bean revealed that his next project is a play about the phone hacking scandal, so he is back to his political best.

The second Charing Cross Road fest built on the successes of the first and we again had a buzzy atmosphere in the shop, helped by the return of our Penguin Books Treasure Hunt, this time to win the top 20 Penguin Modern Classics and a competition to win 40 Vintage Children's Classics. We would like to thank everyone that helped make this year's festival a success - from all of the authors and publishers who came and arranged events, to all of our lovely customers to came to listen to some fascinating talks and support their local bookshops.
Posted by BlackwellsCXR at 10:36