Something for the weekend.. And the Band Played On.

And the Band Played On by Randy Shilts 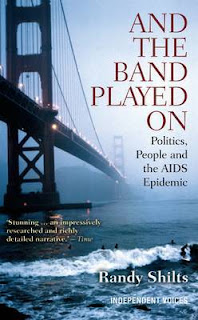 Perhaps not something for one weekend, as this brick-like tome of over 600 pages has taken me several weeks to read, but it is such an important and fantastic achievement that anyone with an interest in HIV/AIDS and LGBT history should count it as a vital addition to their library.

One of the greatest joys of working in a bookshop is that virtually any gap in your knowledge or nerdy new obsession can be addressed by just having a wander along the shelves or a chat to well-read colleagues. So when I watched David France's 2012 documentary How to Survive a Plague and realised how little I knew about the history of AIDS, I decided it was time to read a book with a huge reputation within the canon of AIDS literature. I approached it slightly dutifully; one of those books you feel you should read but always found something else shorter or more uplifting to tempt you away. I was not expecting to become so immediately absorbed in the book that I resented anything coming between me and reading it, but that is precisely what happened.

Published in 1987, And the Band Played On is a work of investigative journalism that tells the story of (what were at the time) the earliest confirmed cases of AIDS in America in the late 1970s and the devastating spread of the disease throughout the 1980s. With a focus particularly on San Francisco, where Shilts worked as a journalist and where AIDS first struck hardest along with New York and Los Angeles, the book uses a pacy timeline to examine the responses of health departments, government officials, activists and individuals to the AIDS crisis. As the timeline ticks away the sense of AIDS as a looming, unchecked threat grows along with the realisation that the Reagan administration's apathy in the face of a 'gay cancer' is allowing the disease to kill thousands of people.

Shilts skillfully manages a range of institutional and personal responses to AIDS so that a cast of characters emerge to create a readable story out of a vast mass of information. There are doctors who were used to treating skin complaints and ended up becoming experts on Kaposi's Sarcoma, the clashes of ego among big name researchers, the fatal resistance by leaders of the blood banking industry to acknowledge that AIDS could be spread through transfusions and the men who formed the Gay Men's Health Crisis in New York City, educating themselves and others and raising money in the face of crushing indifference from the Mayor's office. The embattled scientists at the Centers for Disease Control offer a perfect microcosm of the shocking lack of interest in investigating AIDS: by 1984 it takes the CDC four months to secure $2.75 for new door handles for the lab working on AIDS-infected materials so that researchers don't have to touch doorknobs with contaminated gloves. At this point, Shilts tells us, over 2,000 Americans had already died and 2,615 others had been diagnosed.

As the dates flow past and the numbers of people dying rise, a sense of small-scale frustration turns to anger as those involved in the struggle come to the horrifying realisation that America does not seem to care about its citizens if they are gay, drug users giving birth to infected babies, haemophiliacs or Haitian immigrants. The idea that the media and the medical establishment will only show an interest once 'normal Americans' start to die is illustrated by Rock Hudson's announcement that he is dying of AIDS towards the end of the book, when suddenly the world's media become interested in an epidemic that has already killed thousands.

It seems wrong to say that this book reads like a thriller, when AIDS killed so many real people during the 1980s and continues to do so worldwide today. But its masterful juggling of so much information, at once scientific, political and personal, is so impressive that it really is hard to stop reading. The sense of dread and the simple wastefulness of the whole mess is weighty but not paralysing, spurring me on to read more and feel angrier with every page. But in between the rage and injustice of the story there are moments of hope and joy, from the tales of activist support networks that grew out of the misery to the bravery of men offering their dying bodies for research in the hope of curing others. At one point I looked up from this book and realised five hours had passed, leaving me with a kind of melancholy reading hangover as I left the 1980s behind. I don't think I've ever read non-fiction that has captured my imagination so fully and left me thinking about a book for so long afterwards.

Buy it here
Posted by BlackwellsCXR at 15:24