Something for the Weekend: A Handful of Dust 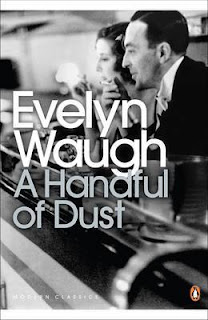 Evelyn Waugh's A Handful of Dust, though published in 1934, reminded me strangely of Robert Rodriguez's 1996 film From Dusk Till Dawn. Although there is significantly less violence in the former, the sudden change in the plot was as shocking as the moment in Rodriguez's masterpiece when Salma Hayek transforms into a vampire. In both cases there is little warning of the coming plot twist that is so dramatic it is closer to a leap across genres.

However, just as I love From Dusk Till Dawn, and not just because of George Clooney, I loved A Handful of Dust despite its bewildering narrative arch. The story of a marriage on the brink of dissolution is beautifully, though heart-breakingly, portrayed as each character gradually loses faith in their relationships. The sense of loss that runs through the book only deepens the affection you feel for the character of Tony, a man who seems completely unable to control his own destiny, just as he is unable to control his own wife. The coldness and cruelty of the high society in which Tony and his wife Brenda mingle is not unlike that of Fitzgerald's The Great Gatsby, both presenting environments where everyone knows everyone elses business. Waugh's style presents this brilliantly as dialogue transports you between social circles effortlessly, as if you were travelling through the very dinner parties that Tony is forced to endure. From the very start, Waugh allows you to feel as if all the characters are old friends whom you know well and slightly disapprove of.

Though shocking and bewildering in places, Waugh is an author whom I would return to again and again.

Robyn
Posted by BlackwellsCXR at 15:49