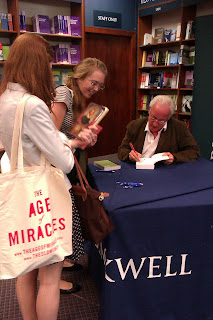 After months of planning, the Charing Cross Road Festival 2012 finally arrived on Saturday. It was a brilliant day and we hope to repeat the success with lots of future festivals and one-off events.

The day in Blackwell's kicked off with Simon Callow and Michael Pennington talking about Shakespeare and why he is still so relevant to people 400 years after he died. It was a tough ask in one hour, but it was a treat to hear such experienced and eloquent actors discussing the bard. The conclusion seemed to be 'he's still performed because he's so great' - Shakespeare sums up all aspects of the human condition and everything you can experience in life.

The second event of the day was with Ben Aaronovitch who was speaking to Paul Cornell about his new book, the 3rd in his Rivers of London series, Whispers Under Ground. This was a fascinating talk to which a lot of people came. The queue of people waiting to meet Ben and get a signature on their books was really heartening to see - it's what we booksellers live for! 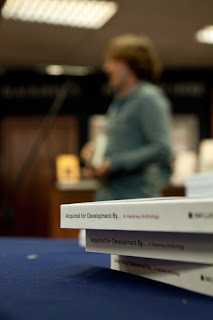 After Ben Aaronovitch and Paul Cornell came Clive Bloom talking to Alex Preston about his new book, Revelations. Clive had been in the shop chatting to people about the history of unrest and rioting in London with his amazing map which people could add their stories to. He then stepped up to interview Alex about his new book.

The events were brought to a close by the lovely people of Influx Press who were reading from their anthology of stories about Hackney, Acquired for Development By..... This was the event most of our staff were looking forward to and it didn't disappoint: there were stories about living on a boat in the Hackney marshes; a story about falling in love with an electricy pylon; and one about the take-over of an individual area of London by big, bad, chain stores. 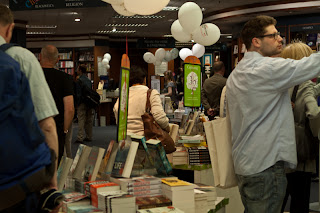 In the evening we had an epic pub quiz, run by our wonderful Ops manager, Gary (he kept all the questions a secret from the rest of us so we could still join in). One of the Blackwell's teams won - but, really, there was no cheating! There were lots of books which our lovely friends at all of our publishers had given us to give away as prizes but it ended up being a swap shop, with people giving books away and exchanging them for ones they wanted more.

Throughout the day we had the book doctors offering prescriptions of recommends for all ailments and a treasure hunt with Penguin Book and lots and lots of freebies and balloons. The day created a real buzz in the shop and we hope to repeat and build on this success in the future as it was great to see so many people, customer and staff, having such a fun day.

We hope that the festival did what we wanted it to - remind people book shops are an important part of our culture and an integral part of Charing Cross Road. 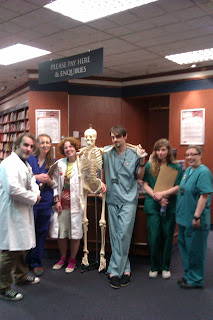