Something for the Weekend.. Wildwood

by Colin Meloy
with illustrations by Carson Ellis

I have to admit there's really only one reason why i sought 'Wildwood' out to read, & that is Colin Meloy's 'day job'. He is the Lead Singer/guitarist/song writer in American folk rock legends 'The Decemberists'. Much more popular in their home country than here (catch up England!), they are a great band. I won't go on about them as this is a book review (but go and buy my favourite 'Picaresque' right now & then the collect the rest - they haven't done a bad album). One of Meloy's gifts is that in his songs he can, & often does, tell a great story ('The Mariners revenge song' is a particular highlight). So when i heard he was writing a book it seemed like a very natural thing for him to do. 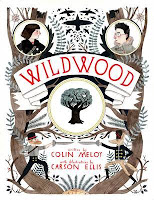 Aimed at the early teens Wildwood is a pretty epic tale, weighing in at over 500 pages. Along the way it includes some beautiful illustrations by Meloy's wife Carson Ellis. Some of these sit alongside the text & some are single colour sheets -you may be tempted to snip some of these out & put them up on the wall - they're delightful.

The plot centres around Pru a young girl from Portland, Oregon (where the Meloys live) whose baby brother Mac is suddenly & inexplicably stolen by a murder of Crows who fly away with him into the nearby 'Impasabble Wilderness' -as the locals call it as it's.. well you can guess... Obviously distressed by this Pru sets off to rescue him & is joined by a shy local lad called 'Curtis'.  Making their way into this enchanted forest they encounter a group of bickering Coyotes in soldiers uniforms, and so begins a quest that will take them a great distance with much heartbreak & involve them both growing up a bit faster than they may have cared to.

Wildwood has a lot going for it, Meloy has a good ear for dialogue & there are some nice modern cultural references. There's plenty of action to keep all ages entertained, good guys to cheer for & villains to hiss &  who doesn't like talking animals? In the Wildwoods he's created an intriguing mini-kingdom, a society with different factions not quite in harmony with itself. The book is sub-titled 'The Wildwood Chronicles Book 1' & i can see there's a lot of scope for future stories (but don't worry it does have an ending!). If I had one, very minor, quibble it's that anyone who loves Terry Gilliam's 'Time Bandits' will be shocked at a pretty obvious erm.. 'homage' around the half-way mark, you'll see what I mean.

Buy it here
Posted by BlackwellsCXR at 16:30