Something for the Weekend - Overdressed 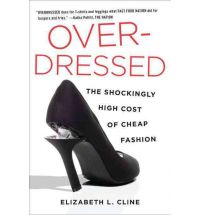 The book is about how cheap fashion retailers (such as US brands Target, Forever 21 and European brands like H&M and Zara) have created an attitude in shoppers that makes us buy loads and loads of cheap, badly made clothes, in favour of buying a few more expensive pieces which will last more than one season. Cline says that part of the reason for this is that ‘trends’ have become the new fashion trend – you can’t pin down the look for fashion since 2000 because the look has been lots of different looks. This means that the retailers bring in new lines and items of clothing every single day, to make people shop more and more and more.

This attitude in customers has also led to devaluation in the perception of what clothes should be worth. Cline talks to bloggers who share their ‘hauls’ – a video or blog post about how much clothing they buy in a single session, mostly from the cheap shops. One girl she interviews in the book refuses to buy a blazer because it’s $45 (about £30) and not because she already has 10 blazers. This attitude has obviously led to a need to change the manufacturing process.
I liked how Cline covered every aspect of the ‘Shockingly High Cost of Cheap Fashion’ and was especially interested in how demand for lots and lots of cheap fashion has changed the way clothes are made.

The US (Cline in American so the book focussed on the US garment industry) used to have a large clothes and fabric manufacturing industry, especially based in New York’s garment district and LA. But over the last 40 years or so, it became so cheap to make clothes in countries like India, Bangladesh, China and Guatemala (where there is either no minimum wage or a very, very low one for workers), that very little clothing is made in the US any more. There are a few factories left, that can get trends into the shops quicker, but the vast majority of manufacturing has moved abroad. This has had a knock-on effect on the unemployment levels and also the conditions the textile workers abroad have to endure. I found it interesting than even China is starting to price itself out of the market as its workforce becomes more skilled and the garments they can produce more sophisticated.

Cline ends the book with a plea to us all to shop more wisely and in a more sustainable way. Most synthetic fabrics are produced by burning fossil fuels, and as we all know, they are running out. She talks to people who sew their own clothes from scratch and those who refashion existing modern and vintage clothing to reuse the fabric and garments which are already in circulation, and to stop them going to landfill. There is a growing market for sustainable clothing and she talks to some shops who are trying to re-educate people to pay a good price for clothes which have been made from quality fabric and sewn by workers earning a living wage.

Amelia
Posted by BlackwellsCXR at 14:49