Something for the Weekend - Shooting an Elephant - Orwell


Shooting an Elephant: And Other Essays – George Orwell

Another of those authors that sits on the “I really should read that some day” list for most, George Orwell's essays are often overlooked in favour of his fiction due to their resounding placements at the heart of a swathe of modern culture. Nineteen Eighty-Four can be referenced time and time again in the age of “Big Brother”, and it is the familiarity of both the content and Orwell's style that keeps the sales of his novels up today. But Orwell's style of a smooth but invigorating punch is best exemplified, for me, in his essays; and Shooting an Elephant is by far my favourite collection of them.

Born in India in 1903 as Eric Arthur Blair, Orwell's family settled in England a year later where,  from the age of 8, he attended St. Cyprian's boarding school. It was his experiences at this school that would later construct the essay Such, Such Were the Joys. Orwell headed back to India in 1922 to join the Imperial Police, his time here leading him to write both A Hanging as well as the headline piece of this collection. Shooting an Elephant presents Orwell's feelings towards Imperialism claiming that he is 'all for the Burmese and all against the British', going on to say that 'feelings like these are the normal by-products of imperialism; ask any Anglo-Indian official, if you can catch him off duty.' This essay is a great introduction to Orwell's constant battle between his awareness and curiosity towards internationalist progression and his great sense of patriotism, the latter which can be seen running high in essays such as Some Thoughts on the Common 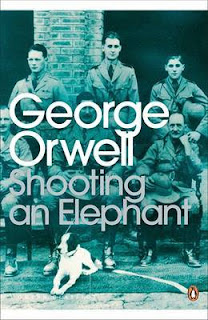 Toad and In Defence of English Cooking.

For those that have already journeyed through some of Orwell's biographical pieces, this collection would be a perfect bridge in to his essays as there can be references found to these other works throughout. Looking back on the Spanish War is a clear nod to Homage to Catalonia, bringing a bitter and intense reflection of the bright hopes and cynical betrayals of that chaotic episode. As well as this, The Spike almost summarises certain chapters of Down and Out in Paris and London: Orwell's first published title that happened to originally be released as fiction, my favourite of his “non-essay” works, and another book that I would highly recommend to all.

My personal favourites within this collection however are as such because of the strong familiarity that I personally hold with all four of them, and if nothing else I recommend this book to all for these essays alone. Why I Write and particularly Confessions of a Book Reviewer give bravely honest accounts of Orwell's writing habits that would have required a brutal self-reflective jaunt through his own mind. The third of these four is Books vs. Cigarettes, a pocket version of which is always kept handy to lend out to the people around me that insist I should drop the addictive habit of reading and pick up a similarly addictive habit of smoking. One read of this essay and most give up their efforts and leave me in peace with my nose buried in the crease of another of Orwell's titles (that's what will happen when you come and buy this: you'll be returning for the rest of his back catalogue). My favourite of all though has to be Bookshop Memories, this essay repeatedly makes me giggle as it reads like a biographical account of my working days here at Blackwell's, pick it up and you'll soon see why.

Buy it here
Posted by BlackwellsCXR at 15:45