Something for the Weekend

This weeks Something for the weekend has of course been influenced by our up & coming Gothic evening in conjunction with the kitschies, Thursday 8th of March! Don't forget. Did you see us in the Stylist? Who are you to argue with the Stylist? Right we'll see you here then. 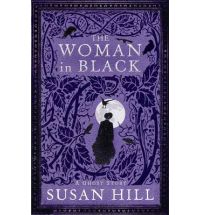 The Woman in Black has been all over the news thanks to the new film version starring Daniel Radcliffe. A good film it is to, it made me jump a lot & that is what it is supposed to do. Plus it has a lovely sinister Victorian feel to it, it's genuinely creepy and it's a Hammer film! It's so nice to see that name back. Add some good performances from Radcliffe, Janet McTeer & the chubby scouse one from 'Goodnight Sweetheart' & you've got a good night out. But is the book better - of course it is!

The novel (unlike the film) begins with Arthur Kipps telling his tale of woe to his new family at Christmas. The tale itself centres around a job of work Mr Kipps had to do many years ago. He has to go to  a spooky old house in the middle of nowhere to sort through the papers of the recently deceased owner. The locals unsubtly try & dissuade Kipps from having anything to do with the house but 'Scooby Doo' like he goes anyway. Sadly Kipp's actions have terrible consequences, but I'll leave you to discover those yourself.

Not a long book it still unwinds at a pleasantly leisurely pace & allows you to luxuriate in it's cosy olde language & manners before the jolts kick in. The lonely house, the eerie moor, the reticent villagers - these are classic staples in the traditional ghost story, but this book has much more to offer. For example the devastating reason for the hauntings is revealed piecemeal alongside Kipps visitations. A book for a cold night in front of a big fire with a bigger mug of cocoa - don't read it on the train on a gloomy night.

Gary
Posted by BlackwellsCXR at 16:09