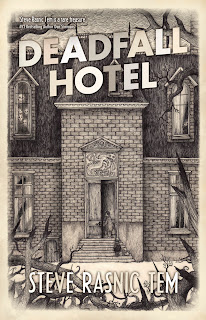 I think an important aspect of the Gothic we rarely capture (and I include myself) is its transient nature. The Gothic is like the weather—we can feel it coming, the electricity in the air, and we can witness the way it begins to change the quality of the light of our once sunny day, the clouds edging with gray, the shadows racing, and then we’re in the midst of it, the cold and the damp creeping into our clothes and transforming our skin, and we're terrified by its darkness and ferocity. But then it passes, and we find ourselves in a more temperate, perhaps more optimistic environment, where we can better appreciate the differences, where we can understand that, as overwhelming as it was, it was but a piece of a much larger and more complex world.

Or perhaps the Gothic is the ruined, disturbed landscape we have to pass through on our way to our final destination, and we’re forced to spend one night within its borders. Choose your favorite metaphor.

My point is that with some perspective this condition can be seen as transitory. We don’t spend our entire lives there, and I believe the Gothic can be fully appreciated only in context, and in contrast to what comes before and after. Spend all your time there if you like, but I think if you do you may miss its true significance.

I believe that in the Gothic we have two threads of authorial perspective coming together: horror and the weird, both evolving out of our mortal condition and our realization that ultimately we must die. Our fear of this reality drives the horror of it, and the absurdity that we are mortal when we have such strong immortal aspirations drives our sense of the weird, that somehow the impossible can be true. The horror of life terrifies and makes us despair, while our sense of the weird makes us feel such strangeness that we’re just as likely to react with black humor or even delight as with terror to where this experience takes us.

In my new novel,  Deadfall Hotel, (out in May from Solaris Books) I’ve tried to create the ultimate haunted resort, a place where our nightmares go, where the dead pause to rest between worlds, a place where our fears can walk about freely and elaborate themselves into fanciful phantasmagoria. It is a locale where the impossible is bound to happen. And yet it is also a funhouse, a setting enabling us to see the humor of our situation from a relatively safe vantage point, and still be thrilled by what we witness.

But it is also a stage where real life occurs, where a single father must make decisions about the well-being of a daughter developing into womanhood, where grief must be addressed and healing attempted, where mistakes are inevitably made and lessons imperfectly learned. And for me, it became a vehicle in which I could explore the roots of fear and society’s fascination with all things horrific.

It is also pay-by-the-night lodging where, after our visit has completed, we can drive away, to experience it again in memory, and quietly contemplate our limited stay.

Steve Rasnic Tem's 300 plus short stories have appeared in such publications as Asimov's, Black Static, Interzone, and Stephen Jones' Best New Horror. He is a past winner of the British Fantasy and World Fantasy awards. His new novel, Deadfall Hotel, will be published by Solaris Books in May of 2012. In this Edward Gorey-esque, Mervyn Peak-esque novel a widower takes the job of manager at a remote hotel where the guests are not quite like you and me, accompanied by his daughter and the ghost of his wife--"a literary exploration of the roots of horror in the collective unconscious." New Pulp Press will be bringing out a collection of his noir short stories, Ugly Behavior, in August of 2012.

Visit the Tem home on the web at www.m-s-tem.com
Posted by BlackwellsCXR at 11:44