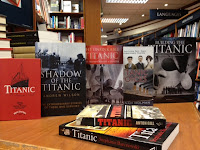 On the 10th April, 1912, R.H.S. Titanic, a passenger and mail service liner, launched from Southampton, outward-bound to New York. On her maiden voyage, the largest ship of her time, ventured offshore, with 2,200 passengers and crew on board. Five days later, their undetermined fates transpired, as the ship collided into an iceberg and sank into the North Atlantic ocean.
The news of R.H.S Titanic stunned the world and no wonder with the estimation of 1,500 death toll. This iconic vessel, grand in design, is deeply embedded in our social history. The dramatic event still evokes, especially with families affected by the aftermath. The centenary of Titanic bridges an extensive scope of books, released to commemorate those involved and affected by ship's allure.
Rod Green's pictorial hardback Building the Titanic comprises of photographs, blueprints and illustrated cross-sections. This book embarks on the beginning. Conceived in 1907, the decision to build it; the two years spent with designing up plans and contracting, the 37 months toil of in the shipyard builders. Advanced safety features, such as watertight compartments and doors, more then 4,000 tradesmen pridefully crafting this monumental ship. First class suites costing up to £870 (£63,837 today). Comfortable and luxurious, with a swimming pool, on-board gymnasium, libraries, fine-dinning and opulent cabins. It is a comprehensive edition for anyone who is interested in this subject.
Extraordinary Stories of Those Who Survived the disaster are written by Andrew Wilson in his book Shadow of the Titanic. Due to outdated maritime safety regulations, Titanic only carried enough lifeboats for third of her total passenger and crew capacity. The surviving 705 people were rescued by another ship Carpathia.
Julian Fellowes, Walter Lord and Brian Lavery investigated all details of the descent of 'unsinkable' Titanic in their work titled A Night To Remember. This carefully prepared book has a new approach and it will be a perfect read for Titanic fans.
There are other specialist authors that explore history of the Titanic, mostly recommended Allen Gibson with his book Unsinkable Titanic, Hannah's Holman Titanic Voices, Robert J Strange Who sank the Titanic? also Anton Gill,  Lawrence Beesley, W B Bartlett and Stephanie Barczewski, whose books are available now in our Charing Cross branch.