Something for the weekend.. Department 19: The Rising

This week's 'Something for the weekend' is a bloody business.

I feel I should point out for the squeamish that The Rising is grisly, very grisly, throats are torn out, bodies explode, there's blood, gore & mayhem at every turn, what can I say - it's basically a whole lot of fun. They didn't write books for teenagers like this when I were a lad (which is why I 'have' to read them now). 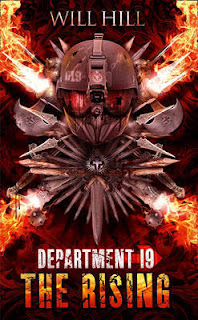 We'll start with a brief history: Will Hill released the first Department 19 book last year, his debut novel is based on the genius idea that Stoker's Dracula is not a fiction but is actually a re-telling of the truth. Brilliant. Also, once they'd slain the creature, that Van Helsing, Harker et al set up the nascent 'Department 19' a top secret force run by the British Government to monitor & fight the evil Vampire forces. Oh & Frankenstein's monster is also real & helps D19 fight Vampires. Brilliant. The hero of the two books is Jamie Carpenter a young lad who is unwittingly thrust into the story due to his (unknown) heritage.

Of course the idea that the British Government could run a top secret Vampire slaying squad is hilarious, (or run a top secret anything, or run anything...  anyway) as is the idea that Dracula was real etc. But that really isn't the point. The point is that Hill goes about it all with a very straight face which is essential to making it so enjoyable. He flits very nicely along the time lines which breaks up the furious pace of the present day plot & gives you a chance to catch your breath with a nice bit of back story. The teenage leads are believable & not too annoying (to older readers), & I love his Vampires - they're so louche - as all good Vampires should be.

Two books in & I can't wait for the next! If you like these I'd also recommend the trilogy by Del Toro & Hogan Strain, Fall & Night Eternal not dissimilar (though the hero is the father not the son) if you can get past some of the 'it's quiet.. too quiet' b-movie dialogue they are worth a look. But start with D19 as they are much superior.