Gamebooks – not just for geeks by Michael J. Ward

A great big thank you to Michael J.Ward for this guest blog spot!
His new book The Heart of Fire is out now. Visit his website at www.destiny-quest.com 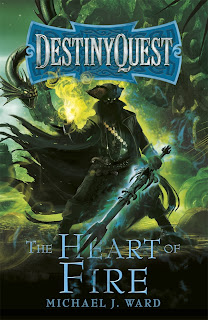 I’ll always remember my first book signing. As an author I guess it goes without saying that I have a hyperactive imagination, so my visions for how this was going to play out were lofty to say the least. I was unflappable in my belief that this would be my next grand step on my march to literary glory.

And yet, as I approached the lucky bookstore, niggling doubts started to enter my mind. No queues outside, trailing around the block. No police cordon. There wasn’t even a helicopter circling overhead. Could this be right?

I entered the bookstore, preparing myself for the screams and the rush of fans. Silence. Just an elderly lady flicking through an Alan Titchmarsh, and a couple of sniggering teenagers loitering around the ‘Fifty Shades of Grey’ stand. I couldn’t even see my signing table or the giant banners that proclaimed my coming. Hopes dwindled as I was led to the back of the shop, to a low table set up in a very dark corner. It even had cobwebs and what appeared to be the skeletal remains of the previous author. The table had a snakes and ladders board on it. And the chair was a puffy cushion.

The children’s corner. Decked up for Halloween. And I felt like a prize pumpkin.

My immediate crowd were screaming babies and toddlers, and beleaguered mums wrestling with books, bags and prams – casting a yearning eye towards the nearby Costa Coffee. One child took pity on me and grabbed one of my bookmarks. Then proceeded to try and take the whole pile that had cost me fifty squillion pounds to have printed. I awkwardly removed the said items from the child’s hands, careful not to insight tears or a potential law suit.

Yup, this was the reality. And I had to tell myself, ‘Mike, you’re here to sell – and they ain’t gonna come to you.’ That’s when I activated Terminator-mode, my scanners sweeping across the store to obtain lock-on with a target. It was time to find the (soon to be) DestinyQuest fans. With book in hand, I extracted my knees from beneath the table, gave a warning glare to the child who was edging back towards my bookmarks, and then went on the hunt.

As I stalked the shelves, probably looking like some slightly deranged Frank Spencer, the true realisation dawned on me. Who was a typical DestinyQuest fan? You see, DestinyQuest is not like your ordinary fantasy novel. It is an interactive gamebook – where you take on the mantle of a hero and guide them through the story, making their choices, fighting their battles (yes, dice are involved – we’re going retro here) and deciding the outcome. It was influenced by my love and obsession with computer games, particularly online role-playing games like World of Warcraft. I wanted people to take a break from their screens and get back to the roots of gaming – rolling dice and imagining the action for themselves.

I’ll be honest. To my shame, I started with the stereotypes. So I turned on my geek-radar and headed to the Manga area. The cool kids there had a kind of geek chic going on. This would be good – an easy sell. They listened to my spiel and laughed. Okay. Need to work on the sales pitch. Next, a sizeable fellow with an impressively large beard. He had to be a closet geek. No, he was a history professor and not un-surprisingly, World of Warcraft did not factor on his curriculum. Okay, let’s stop judging on appearance. It was time for the cunning Plan B.

In the absence of a Plan B, I went straight for C instead. Approach everyone and anyone, and have no shame. You’re here to sell. And so, I did. Forget Frank Spencer, now I was a homing missile and nothing would steer me off course. Whoever stepped into my path would be the next target. And so I ended up face to face with that elderly lady. I glanced at the Alan Titchmarsh and knew this was going to be an uphill struggle. But I pushed on regardless. When I finished there was a heavy silence. Her expression was unreadable, a slight frown crinkling her eyes. A firm ‘no’ was coming – or worse, she was trying to remember which pocket she had put the mace spray….

Turns out she bought four copies for her grandchildren (in their early teens). Next it was a couple in their fifties who still played Dungeons & Dungeons every Friday night. A few mums bought them as presents. A fellow author bought one because he loved the concept.

I approached people who I never expected would entertain the idea of a ‘gamebook’ and their eyes would light up when I showed them the full-colour maps (difficult not to stroke and make cooing noises) and explained how the idea worked.

Fathers bought it for their sons (with a knowing wink that said ‘No, this is really for me.’). A teacher bought ten as prizes for her school. Thirty-somethings (like myself at the time) immediately recognised the format and remembered back to the ‘Choose your own’ adventure books they played as kids. They bought it too.

By the afternoon I had sold out of books. And I don’t think I sold a single one to anyone who I would have termed a traditional “geek” – the type that the Daily Mail would no doubt label a ‘gamebooker’. I was shamefully guilty of this too, but my eyes were opened that day. Trying to pigeonhole the books is impossible. I have a readership from 9 to 90. Perhaps that is why I was originally put in the children’s area through no fault of the staff – they saw the word ‘gamebook’ and assumed it was just for kids.

So, I didn’t get the queues or the police escort – or even a single screaming fan, but I did leave the bookstore with a huge smile on my face. I enjoyed the face-to-face selling, and talking about my work to such a wide breadth of people – of all ages and backgrounds.

So, if you end up coming across a DestinyQuest book (or get approached by a Frank Spencer look-alike who asks you if you’ve heard of ‘World of Warcraft’) – don’t judge on appearance. Take a closer look. You might be surprised.