Something for the Weekend - The Sisters Brothers 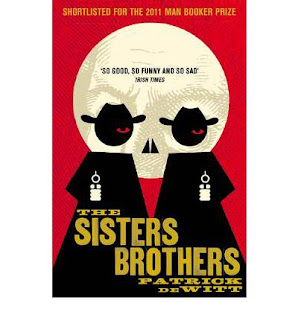 As a short disclaimer before I begin I feel I should mention that my favourite author is Cormac McCarthy. This may go some way to explain why a review of Patrick DeWitt's excellent second novel has become hijacked by me gushing about how great McCarthy is. Mainly it's because when I read DeWitt I found them to be similar in their narrative choices, though their styles are very different. Cormac McCarthy is not the easiest of reads, and his novels are almost always dark, violent and disturbing. They are also beautiful, engrossing and often funny reads that are constructed with astounding attention to detail and characters that can terrify you and break your heart. Over the past three years or so, I have read everything the good man has written, and until he publishes another masterpiece I have been searching elsewhere for novels of the same strength.

Patrick DeWitt has proved an excellent place to start with his novel The Sisters Brothers. His story of Charles and Eli Sisters, the brothers that give the book its title, is endearing, funny, and often brutal. The pair are riding across America to find Hermann Kermit Warm, a man whom they have a contract to kill. During their journey, the gentler and more engaging Eli comes to question their occupation as contract killers and his relationship with his increasingly distant and violent brother. The prose is so smooth that you can glide through this novel as easily as if Eli were speaking to you across a desert campfire. He tells you jokes about his horse that he didn't want to name, but then recounts moments of human suffering that he and his brother have witnessed and in some cases caused. Set against the backdrop of the California Gold Rush, where men seem to be losing their heads around them, the brothers are forced to make a decision between personal initiative and the safety of following orders.

Even if a traditional Western is not your usual cup of tea, the character of Eli is enough to change your mind. He is honest, frank, and unwittingly amusing, and it is the construction of his character that causes you to become so invested in the fates of himself, his brother and their comrades. In the same way, Billy Parham of Cormac McCarthy's The Border Trilogy is instantly sympathetic and engaging. The story of him and his real and adopted brothers is devastating just as it is beautiful. McCarthy uses far denser prose in his novels, but Eli and Billy are similar in their moral struggles and their desires to find the best in people, even if they have witnessed the worst. Both authors are expert crafters of stories, and until McCarthy writes something new, I intend to work my way through DeWitt's back catalogue.

Robyn
Posted by BlackwellsCXR at 13:40