Something for the weekend - Song of Achilles 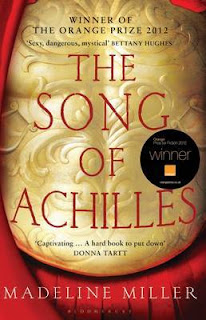 I started reading Song of Achilles in anticipation of the event we had with Madeline Miller at the beginning of the month. It's been a while since I read a book that stayed with me after I'd finished it; the kind of  book you want to finish, to find out what happens, but that you also want to go on forever.

I have not read the Iliad, but this book has made me want to. Miller has taken Achilles's story from the Iliad and his glory at the siege of Troy as her starting point for the novel and worked back to his childhood to see how he might have become the great hero of Troy he is destined to become. She has made Achilles's companion, Patroclus the main focus for the book; if Patroclus doesn't see something, we don't see it. Patroclus was born a prince but exiled from his kingdom after accidentally killing another boy and it is after his exile, when he is sent to live with Achilles's father, Peleus, that their relationship starts to bloom.

There have been many debates about the nature of the relationship between Achilles and Patroclus. In the Iliad, it appears to be the model of a deep and loyal friendship; in 5th Century BC Athens the relationship was seen as an example of the socially accepted relationship between an older man and a younger man; Plato's characters in The Symposium assume they were a couple. It is this last view that Miller has taken and in so doing, created a really touching love story about 2 people who are completely devoted to each other. They are together all through their teens (at first platonically and then sexually) and throughout the 10 years they are at Troy, fighting to get Helen back from Paris.

I enjoyed the tragic elements of the story - there's something very romantic about a doomed love story. It is prophesied quite early in the book that Achilles will die at Troy, despite being the best warrior in all of Greece (helped by being half-God). Therefore they know that the longer they are at Troy, the longer they have together. I liked seeing the changes in their relationship as Achilles starts to realise his destiny. Patroclus has seen him practice fighting before, but this is the first time they both realise how good Achilles is at killing. Patroclus, on the other hand, turns his hand to healing and it seems like they begin to drift apart because of their opposite roles. They do both try to do the right thing, though, in a difficult situation, like saving various girls who have been taken from the local villages from the other warriors who would rape them, instead allowing them the freedom to be independent to choose a lover should they wish to. I found the relationship between Patroclus and the first of these women, Briseis, especially lovely. She falls in love with him but he cannot reciprocate as he is so devoted to Achilles (it would have been totally normal for him to marry a woman but continue to have a male lover). In The Iliad Briesis says Patroclus was 'always gentle' and Miller said this was a big part of her reason for wanting to write about him.

As I'm writing this review, I realise I'm finding it hard to articulate why I loved the book so much. Maybe that's my failure as a reviewer, or maybe that's part of a great book - you can't quite put your finger in why it's so great; it just is. You'll just have to read it for yourself!
Posted by BlackwellsCXR at 14:22