Something For The Weekend - Phonogram Vol 2 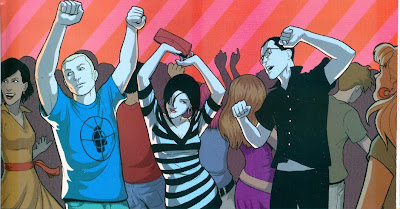 "Everyone I know is a bad person with a great taste in records. I can afford to hold some of them in contempt."

Writing a blog post about Phonogram Vol. 2: The Singles Club at this point in time isn't so much being late to the party, as dropping round the following morning to help with the clean up. It was first released as a graphic novel back in March 2010, a follow up to the excellent Rue Britannia.

So why bothering writing at all? Two reasons. First up, Phonogram is what I suggest to anyone who thinks comics begin and end with men in long underwear protecting Earth from evil geniuses. Secondly, there's another installment due this November entitled The Immaterial Girl which is causing all sorts of Geek hearts to flutter in anticipation. 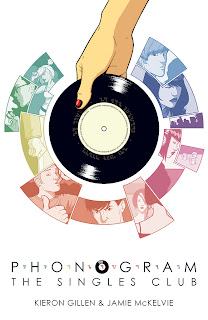 But surely I need to read Vol. 1 first? I hear you say. Well, no. Kieron Gillen (Thor, S.W.O.R.D.) is a savvy writer, and has made Phonogram very accessible (another reason to give it to comic-reading and non-comic reading folk alike). You can dive in and need not know anything in advance. What makes The Singles Club  particularly satisfying is the mastery of storytelling. Seven (count 'em) interconnected tales of seven single guys and girls (hence 'Singles Club') all brought together by an Indie night with a very special set of rules.

Seven tales of impossibly cool but painfully real characters all discovering themselves, discovering each other, re-discovering old geography (both real and psychic). Seven tales of love, loss and regret with an excellent playlist of songs.

But this is a comic too. Enter Jamie McKelvie on art duties.

In addition to being spoiled by the story there is the sort of art that you could frame. I'm being entirely serious, friends of mine have Phonogram art on their mantelpiece. It's not just that the art succesfully conveys story, communicates body language, and captures the mystery of people dancing, but also that every character is immediately identifiable, differentiated and likable (apologies for the long sentence if such things upset you).

And there's another instalment due this November... did I mention that already?

Buy it here
Posted by BlackwellsCXR at 14:13