Something for the weekend..

This 'Something for the weekend...' is not for the faint hearted, this is humour at it's blackest.

It's January 1997 & the times they are a changing, Blair is about to take over, Brit-pop is everywhere & Stephen Stelfox is struggling; except he doesn't know it yet. Stelfox is the 'star' of the book, i wouldn't say hero as a viler man you are less likely to meet. When we meet this nasty piece of work, he is an A&R man in the music business, so he fits in quite well. He despises all the acts that he has to pretend to love & what's worse (for him) is that he's losing any 'touch' he may ever have had (on his first listen to the new Radiohead single 'Paranoid Android' he gleefully declares they have 'lost it' & are 'finished'). Over the next 12 months he will sink lower than he has ever sunk before, taking copious amounts of drugs & alcohol, backstabbing, bitching, attempting murder purely to further his own career, & worse.. 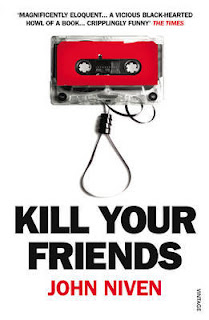 And it's hilarious. Each month is prefaced with a short rundown of what Stelfox deems important. This nearly always includes some bluster from another A&R man (e.g. The Ultrasound deal is really heating up - Simon Williams, head of Fierce Panda, says, 'it is clear that this band will be around a lot longer than 18 months..'). It's amusing to look back on who the 'next big thing' were every month ('Headswim' anyone?)

Imagine Patrick Bateman with a sense of humour & you're beginning to get the idea about Stelfox. You laugh though you shouldn't. My favourite piece of bile comes as a back handed compliment for everyones favourite fame hungry red head. Berating another 'needy' indie band he states Geri Halliwell - "would have risen at the crack of dawn every morning for a year and swum naked through a river of shark-infested semen – cutting the throats of children, OAPs and cancer patients and throwing them behind her as she went - just to be allowed to do a sixty-second regional radio interview''.

If that made you laugh - buy the book. You'll find it in store now on our London Novels table.

For similarly caustic (but less murderous) tales of Britpop i would also point you towards Bad vibes by Luke Haines which is just as funny (& true!).

Gary
Posted by BlackwellsCXR at 16:40